A read-only forum where we'll discuss the game with the intent that listeners can see how we (fail to) apply our own ideas.
Post Reply
6 posts • Page 1 of 1

Let's start with the campaign setup. From this, I want you guys to construct a group template. After that's done, we'll talk individual characters.

The game is set in Faerun (i.e. Forgotten Realms) prior to the Time of Trouble. Consider the entirety of canon from the moment the game starts thrown out the window. Only truth expressed up to that point in history counts. If you need an exact date in the timeline, it's 1357 DR.

If you look at the map below, you'll see the merchant kingdom of Sembia at the southern edge. To the north are the Dales, which contain a variety of city states of varying power, each vying for influence over the other Dales.

You will notice the convergence of two trade roads to the north of Sembia, just above Essembra (an independent city). These roads are the primary trade route between Sembia, the Dales, and the major kingdom of Cormyr (off to the west of this map).

On the southeast of this convergence (though not marked on the map) is the Standing Stone, which is a large stone obelisk constructed ages ago to mark the end of the human/elven wars. The terms of the treaty are inscribed in an ascending circle wrapped around this monument.

To project their power into this tumultuous area and also setup a post to protect the roads from bandits (or grabby Dalesmen), Sembia has created a keep across the road from the Standing Stone. This small keep has been named Stone Keep, after the nearby monument.

Stone Keep was built about 18 years ago and is still under the rule of Baron Wilhelm Kohn. The Baron is a good man, although a bit bitter as he knows damn well he was given this position to keep him disconnected from Sembian politics or the lands he should rightly be awarded back home.

Since the founding of Stone Keep, it's become a popular stopping off point for merchant caravans which rest within its aegis. Many citizens looking for a new life -- or the opportunity to trade with these caravans -- have also settled in the area, creating a mixed community of shops and farmlands that sprawl haphazardly to the south and west of the keep.

The keep has just over 100 professional men-at-arms, mostly skirmishers and light cavalrymen. This force can be supplemented through civilian militiamen -- who are paid a stipend for each day served -- or full conscription of able-bodied locals during a crisis. Conflict with anything more than brigands is extremely uncommon.

The keep has only one main gate, which faces east toward the road and Standing Stone. It has five buildings inside the walls. In the middle is a structure that's home to the Baron, his seneschal, the captain of the militia, the keep's library, and a planning room. To the east (directly within the gates) is a small chapel. To the west is the barracks. To the north is a building that houses military supplies and horses. To the south is a peculiarly large inn, which was provided by the Baron to its proprietor. Most of its capacity is unused, but the innkeeper is required to house any of the locals that might flee inside the wall should conflict break out.

Your characters are at this keep and its town for some reason. And you have to be more than just passing through. If you're visiting, it's a long-term visit.

The area is very predominantly human. Most metahumans are either elves or half-elves from Hillsfar and Elventree. The elves to the east are rather cloistered and xenophobic. Other metahumans could travel into the area but are rare. So I will allow metahumans, provided you have a reason to explain how you came into this area.

If you play a half-orc, you are the result of rape by goblinoid raiders. Expect to be scorned. (Note that in this era, "goblinoid" is used to refer to combined hordes of goblins, hobgoblins, bugbears, and orcs...sometimes also trolls and ogres.)

Final note! While we're using the Pathfinder rules, that doesn't mean we're using all of the Pathfinder trappings. For example, if you play a sorcerer with dragon heritage, that means you're convinced it's in your bloodline somewhere. You don't have any features that would distinguish you from a normal human.

TL;DR version: You're not welcome in this game if you can't take a few minutes to read the setup. 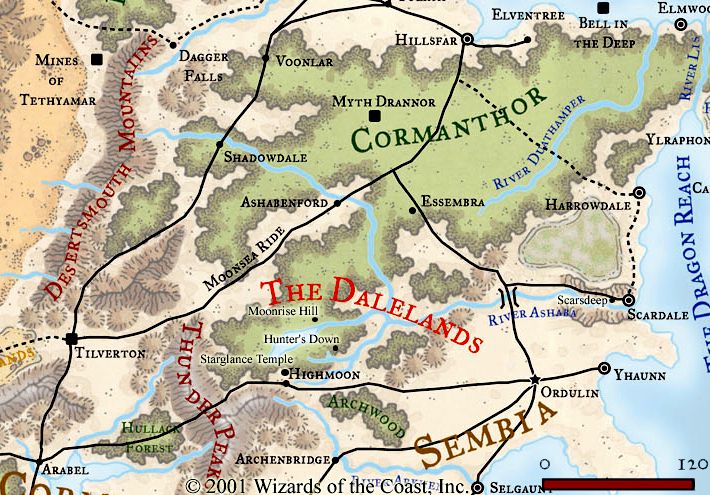 Holy or unholy. Only one homie. Only this gun. Lonely 'cause don't anyone know me.
Top

I'm confused as to what you mean by using the PFRPG rules but not using the trappings. I'd have to ask you exactly what you wanted to alter from the PF PHB before I picked anything but that is a way down the road from our group template.

Let's consider what group template could provide for good tension and conflict in this setting. The obvious answers are straight we're militia skirmishers military campaign and the straight we came to the frontier to crush orcs and loot their loot campaign. Neither of those sound incredibly exciting to me but they're the classic d&d tropes and they're there.

We could be involved with the mercantile aspect, perhaps as our own company.

There's a church. We could be it.

There are enough people here to support a small criminal population. We could be scoundrels that get involved in something more narratively satisfying than petty crime.

There is a government here we could be a part of, either as dedicated troubleshooters or as a more specific kind of functionary. The local attaché from the wizard tower or the paladin order or whatever.

Just riffing here, not thinking at all that this list is exhaustive. Welcome input from all. Right now I'm most interested in being either a fledging thief guild or an organized detachment that's out here from the wizards or the paladins or king or something.
Top

John wrote:I'm confused as to what you mean by using the PFRPG rules but not using the trappings. I'd have to ask you exactly what you wanted to alter from the PF PHB before I picked anything but that is a way down the road from our group template.

To be honest, it's a difficult question for me to answer, simply because I've never played Pathfinder. But to be clear, my goal is not to take away the abilities of any class, unless I just plain can't reconcile them to FR. Instead, I want to change trappings so things feel like they fit.

The one example I mentioned is really the only one I've ever seen from PF: the sorcerer. Let's say you pick dragon heritage. It's my understanding that in PF, that means you have fangs, semi-reptilian eyes, and a breath attack. That doesn't make a damn bit of sense in FR, so I'd just rearrange the trappings. You look like a normal human, but family lore says one of your great-whatever-grandparents was a dragon that took human form and mated. The breath weapon wouldn't go away, but would instead become a free spell where you can spray something in a cone from your hands.

Does that make sense?

If you look half-dragon, people are going to presume you're a dragonkin or Yuan-Ti creation and come after you for your treasure.

As for the group template, all of John's ideas are perfectly workable. But as a side note, you don't have to be so tightly knit, as long as you have a reason to work together. You could all be locals that do a wide variety of things around the town, but since it's a small community, you're all good friends. Obviously, the final decision is in your court.
Holy or unholy. Only one homie. Only this gun. Lonely 'cause don't anyone know me.
Top

Pathfinder Sorcerer's don't look any different from other humans the majority of the time. I don't know all the bloodlines so there may be some that have that, but for the most part you can grow claws or fangs at low level if your bloodline has that and things like wings are MUCH higher level. They are all change at will though and not a permanent appearence change.


Edit: I just double checked Draconic bloodline and wings don't come until level 15, breath until 9th, and you get to grow claws at level 1. These are all free or standard actions and not the natural appearence.

Clementine Paddleford wrote:Never grow a wishbone where a backbone ought to be.

Right. And I'm not trying to harp on a tree, just making a general comment about the forest. We're using PF rules, but ultimately this is a game set in Faerun, not Golarion.
Holy or unholy. Only one homie. Only this gun. Lonely 'cause don't anyone know me.
Top

Here's a visual that might help. Note that this entire area is wooded. The forest has been clear cut where the keep and town/farms sit, but picks up again to the southwest of this picture.

Holy or unholy. Only one homie. Only this gun. Lonely 'cause don't anyone know me.
Top
Post Reply
6 posts • Page 1 of 1