The project resumes with the TiYessin, an exoskeletal species, very close to humans in culture and psychology. They are both bipedal and quadrupedal at need. There's a lot more description which can be found at the EoR wiki here. (note, as of this posting, Dan is upgrading the software and it might not be entirely polished. Also, Dan has not edited my entry, so as usual, don't take anything I've written as gospel.)
I'm glad the project is going ahead full blast, and I hope Dan will chime in with more info. These illustrations are always a technical challenge and educational as well. I learned a lot about exoskeletons on this.

Keith, do you mind if I advice you for someone on another forum looking for commissioned artwork? If you don't, can you PM me some information about rates, time taken for art, contact info, etc. to pass along.
"The power of accurate observation is commonly called cynicism by those who have not got it." George Bernard Shaw
Top

Knaight wrote:Keith, do you mind if I advice you for someone on another forum looking for commissioned artwork? If you don't, can you PM me some information about rates, time taken for art, contact info, etc. to pass along.

I thought of this guy while perusing the "Racism" thread. (For those who haven't read it, it's about non-human races and their interactions in RPGs, not necessarily racism as bigotry.)

I had mentioned that my current campaign world uses anthropomorphic animals as one of its non-human options. I wanted to have a variety of player races, since they're fun to play. At the same time, I didn't want standard fantasy tropes. Elves and Dwarves just wouldn't fit in this post-apocalyptic fantasy I had envisioned. Likewise, I didn't want to make up new races wholecloth, since that might be overwhelming to new players.

So talking animals it was. By designing them so that they had the exagerated characteristics attributed to their root stock, players would have a rough and ready guide to the race as a whole. Foxes are clever and tricky, dogs are loyal, cats are independent and so forth. Individuals vary of course, but it's along the same lines as saying elves are artistic, orcs are barbaric, Vulcans are logical, Klingons are honor-centric militarists, etc.

This is a long lead-in to this piece, but this particular one demonstrates something about the way I structure my illustration fees. In general, I have been told I charge too little for character illustrations. The reason why is several-fold.

First, I like doing them. They're fun. So I don't charge as much in the hopes that I'll get more commissions I enjoy doing.

Second, unless I work out details otherwise, I retain the rights of publication. A client can use the illustration for personal use and post it to websites with attribution. I charge slightly more to relinquish all rights. The reason behind this is that I can sometimes recoup the minor loss by re-selling the piece to another client.

Hence this piece. I had a humanoid rat on one of my campaign book pages. In an image search an emerging company called "Tarprat" found it. Now, they manufacture tarps for trucks, but for some reason, they wanted a warrior rat as their image. Being fine, upstanding folks, they didn't copy-paste-use on all their business material, but contacted me. I sold them the rights. This was an existing piece, but it still represented potential income.

Now i had a hole on my campaign page. So I made a new painting. Several years had passed by since the first illo, and I felt my painting chops had improved greatly, so it was a win-win for me. I sold the old one and painted a better one, which is below. The original for comparison is visible on their home page in a slightly modified form.

tl;dr: Here's a picture of a warrior rat. 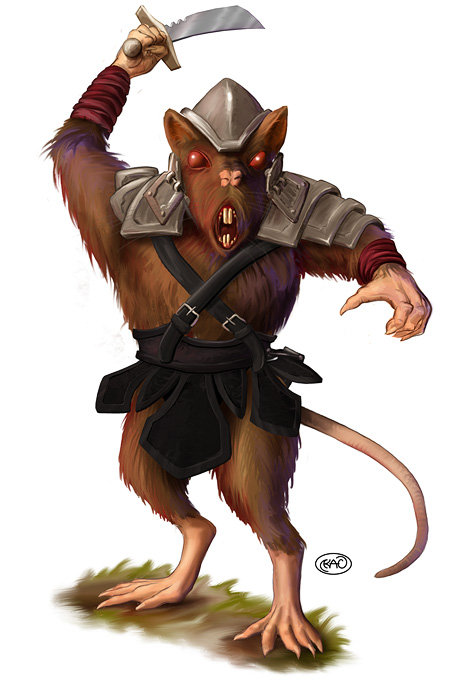 I finished this before going on vacation and though I'm in the middle of the next one, realized that I had neglected to post the Haldyt.

This race is adapted for arid conditions and they are accomplished burrowers. Of course, the modern Haldyt doesn't need to live in a hole in the ground, but they could if necessary.

Details can be found at Epoch of Rysos, as usual.

Crossposted with the Epoch of Rysos Thread.
All images and Epoch of Rysos © 2009 Dan Repperger, all rights reserved
Portfolio and Commissions | Savage Earth | Postal RPG
Top

This race had very minimal description, at least in terms of exact appearance, which was supposed to be "disturbing". The Traygnans have a look reminiscent of externalized internal anatomy, are fairly asymmetrical in detail, and have a number of off-putting personal habits due to these factors.

The write-up is here, (not reviewed and approved by Dan in its final form, yet)

Wow, it's been a long time since I posted anything here. I haven't posted any of the Bloodmoon stuff, I'm letting John control promotion on that, but here is something I recently did for Joe Wetzel for Inkwell Ideas fun and cool Monster Stand-Ins project. These are laminated cards of stock D&D monsters and opponents, suitable for miniature use, but more rugged than paper minis. There's a great line-up of rpg artists on the project.

My entire art direction notes for this were: "A ghost".

I just wanted to thank you, Keith, for sharing your work and even more so for the very in-depth and informative tutorial you posted on youtube. I've always been an on-and-off sort of artist and I've only gotten Photoshop in the last year or two. I've been wanting to make the jump to digital painting, and your tutorial is by far one of the most detailed and helpful ones I've found.

So again, thank you, and keep up the great work!
Nobody expects the Spanish Inquisition!
Contributing author to Sojourn: An Anthology of Speculative Fiction Volume 1 and Volume 2
Top

Thank you, Blue Bandit. I should post more, but a lot of my stuff lately has been fairly uninteresting, bits and pieces of a larger project that don't work well as standalone, or covered by an NDA.
Portfolio and Commissions | Savage Earth | Postal RPG
Top

Something about that face seems 'man-ish' to me. I think it is the jawline.
Top
Post Reply
157 posts