I thought I would start up a new gallery here in the new boards. I'm not sure what piece I posted last in the old one, so forgive me if I repeat. Here's a game map I created for my on-line Savage Earth game. I'll follow this post with some close-ups of some of the characters.

The map is made of stock pieces I created in Photoshop, and placed in Illustrator. This allows me to make many maps while keeping individual file size low. Each tree shown, for instance is a marker that points to a specific Photoshop file. The Illustrator file is much smaller than it would otherwise be. This also allows me to build fairly realistic maps very quickly.

The markers near the top that are translucent represent hidden NPCs, waiting to ambush. This encounter nearly escalated into a TPK.

The two topmost characters in the middle (of the ones that have avatars) are riven, unique monstrous humanoids from my campaign world. You can spot them by their yellow-tinted borders. The one on the left is Aster, a humanoid starfish. The one on the right is Qarl, a hunchback with a waxy consistency to his flesh.

Both of these paintings were created in Photoshop. They are both examples of Speedpainting, a technique where you give yourself a set time to finish the painting, resulting in a piece that looks rough, yet dynamic. Well, dynamic for a person just standing there, anyway. I have a tendency to overwork a piece, so Speedpainting is a tough exercise for me.

Aster
Aster took longer than I had set. This is somewhere around 90 minutes. I was having too much fun with it. They killed her by the end of the encounter, but it took three of them working in concert to do it. Her hide was tough as armor. 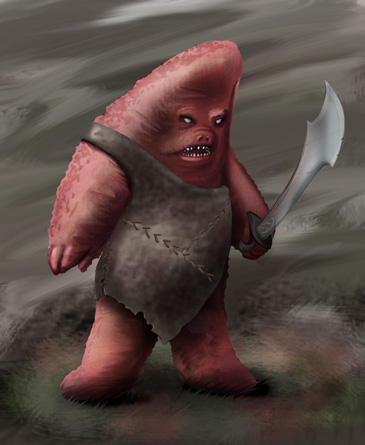 Qarl
Qarl was not designed as a combatant. He ran around the battlefield retrieving lost weapons, and eventually scampered off to get reinforcements. This took about a half hour. 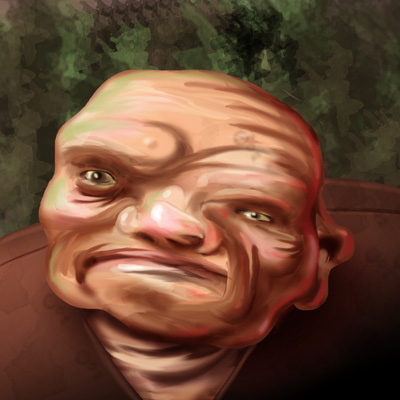 I really like that map! Were the PC's walking along the shore, or did they ford a river? Or maybe swim from a ship?

I really like the "primitave" look to Aster. Primitive tech, not picture.

Thanks! It was the side of a very large pool. They had been rafting down a river and came to a waterfall. Some characters dived over the cliff and swam to that point, others took a footpath.
Portfolio and Commissions | Savage Earth | Postal RPG
Top

You should post the picture you did for me! The drawn one, that is. Not the naught photos. Those are only for us.
Holy or unholy. Only one homie. Only this gun. Lonely 'cause don't anyone know me.
Top

Dan wrote:You should post the picture you did for me! The drawn one, that is. Not the naught photos. Those are only for us.

Will do. I just wanted your permission.

Dan, would you please add any notes you want to this?
I remember it was a tough one, because Dan specifically did not want action or even a dynamic pose. Just a moment, with some implied emotion.

DUDE! THIS IS AWESOME!!!

On speed painting:
What tools are you using (both practical and in the application)?
While I understand that time would vary by artist, how much time do you allow yourself on average?

On the Dan painting:
Tell me everything start to finish.
A bear there was!
A bear! a bear!
All black and brown and covered with hair!
Top

How many layers are you working in?
Not to sound facetious, but as many as necessary. The average on something like this would be at least 6. For things like the translucent minis, they will be on a layer whose entire transparency is set to say, 50%. I'll bring them into the main mini layer to bring them up to full opacity. I'll have a background layer, a layer for things under the minis, the mini layer, a layer for things over the minis, and then the transparent mini layer and finally the grid. The gird is usually a gray line that is set to Multiply. It's easier to read that way.

Do you make your own textures?
Yes, mostly in Photoshop, though I will use Illustrator's built in tools for some effects.

Did you find or make your own hex grid?
Make. It's insanely easy in Illustrator. I make one hex (using the polygon tool), and drag a copy, snapping it to the anchor points to make them line up. Then I'l grab those two and repeat, so I have four, And so on until I have enough. Then I'll do the transparency trick mentioned above.


Speedpainting
What tools are you using (both practical and in the application)?
For speedpainting, It's entirely done in Photoshop, using a pressure-sensitive (Wacom) tablet. I have little to no formal training in traditional painting. Lots of graphic art and illustration training, but not traditional painting.
I work on several layers, so that I can control colors and control over-paints more easily. Dan's illustration probably had around twenty layers.

While I understand that time would vary by artist, how much time do you allow yourself on average?For a speedpaint, 30-60 minutes. For a finished piece, a couple of days.

Dan Painting
Let me see if I can find and post the working proofs I sent to Dan, but:
I got a description from Dan and worked out details, composition, etc through email. I then produced one or two thumbnail sketches, scanned them and sent them to Dan for approval. Once we ironed out those details, I produced a finished sketch. This was done by using a digital camera to work out the details of the pose. I'll work from the digital photo (or several photos in mosaic) I may directly trace portions of the photos to capture anatomical difficulties like hands with convincing detail. That figure is actually from a photo of me, heavily altered in proportion and detail. I'll post another piece after this from several years ago to show just how far I can extend this technique. This final sketch is done on either computer entirely, or roughed out on computer, printed, placed on a light box and finished onto clean paper.

Once all that is done and approved, I begin the painting proper. I rough out large areas of color, the coat on one layer, the flesh on another and so on. I will modify these with very basic highlights and shadows. I don't pay attention to edges yet. Once I have the blocks roughed out, I will erase back to the edge, to give a crisp shape. (The pencil sketch is on a translucent layer above everything, set to multiply.)

Then I will lock in the transparency so that further overpaint is impossible. I will frequently turn this on and off per layer as needed throughout the process. Then begins the work with a variety of tools, such as brush and smear tools, to create the detail, shadows, highlights, etc. Basically I keep working and refining as I go. I may adjust color on a per-layer basis, or put an adjustment layer over the whole thing. I tend to work in higher saturation than is natural, so often I will desaturate a bit at different stages.

I'll send updates to Dan as I go, to make sure we are one the same track. Eventually, it's finished. I flatten the painting (collapse the layers and re-save to make the file smaller. Dan's in its uncollapsed state at full resolution was 237MB. The version I sent to him was 56MB.
Portfolio and Commissions | Savage Earth | Postal RPG
Top

Here's an example of how far I can carry the "using myself as a model" technique. This was based on a photo of me: 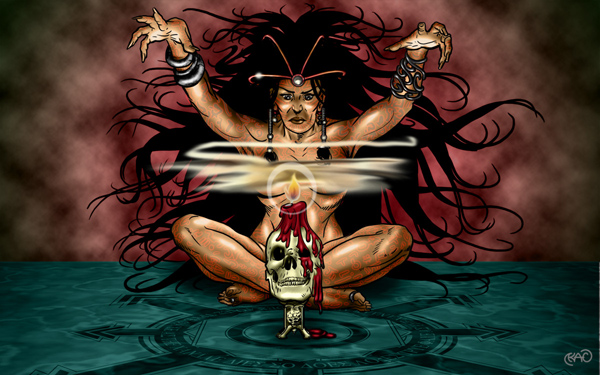 Also most of the figures in this image are me. I photographed myself climbing over the back of the couch, drawing a bow, etc.: 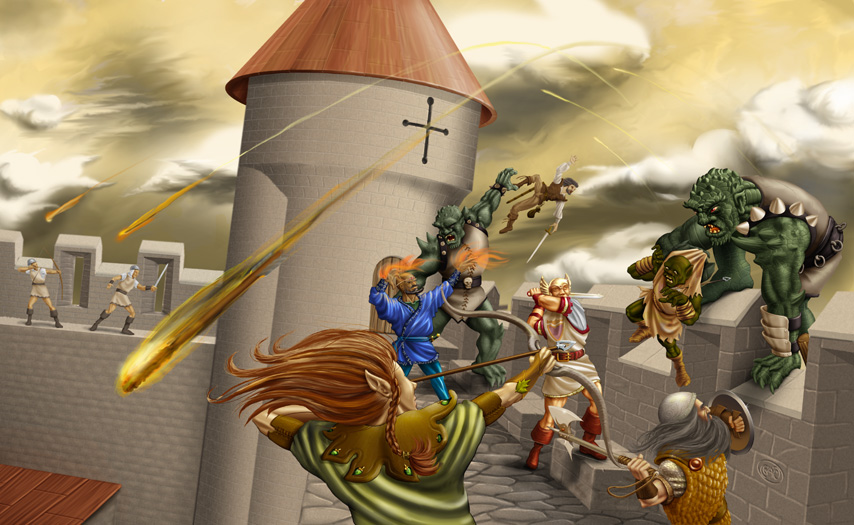 Chad, what was wrong with the image link? It looked fine over here, but was probably cached. DId I need the http:// or something?
Portfolio and Commissions | Savage Earth | Postal RPG
Top
Post Reply
157 posts

Users browsing this forum: No registered users and 7 guests