What are you reading now? Provide links PLZ

Post your thoughts on books, short stories, comics, or any other form of written word.
Post Reply
2263 posts

The book of the longest epilogue.

Book 2 of Skyward is pretty much like book 1. IE kinda scatterbrained clunky. Not really something I'll read again. But not unpalatable. It just kinda is.

And then killed him.

Considering how much of a blood bath the first book was and how much weight every death had that death kinda felt hollow to me. He was a joke character but to just mention it in passing?

I dunno about just 'in passing.' I was pretty sure what had happened the moment they got hit, and hoping I was wrong right up until i was proved right a bit later. The timing of when it happened (and Spin being more hardened than when, say, Hurl died) wouldn't give a lot of room for something more impactful. Besides ... I'm pretty sure she didn't like him as much as I did.

Keeping the nuclear war post apocalyptic theme going, I just today got a very good condition vintage copy of A Canticle for Leibowitz.

Never read it before! Looking forward to it.
Top

NOS4A2 (NOS4R2 for those across the pond, as I understand it, to maintain the phonetic pronunciation of the intended word.)

OK, I'm officially a Joe Hill fan boy. This is my second novel of his. (First was Horns.) Both have been great horror novels. He clearly knows his stuff but has a more 'today' feel, if that makes sense. NOS4A2 is clearly a vampire story. And many of the tropes of an 'archetypal' vampire story are present. BUT... they aren't organized the same way as they always have been in the past. Both books have instilled in my a desire to see the moving picture adaptations (TV show for NOS4A2, movie for Horns). And I will definitely be working through the rest of Joe's novels as time passes.

Getting around to reading this. Good popcorn kind of fun. It also feeds my 3D modelling/visualization/sci-fi gamer lizard brain. 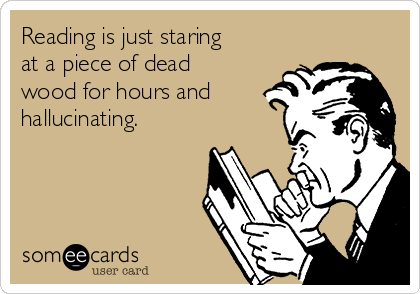 Finished the first Witcher book, The Last Wish, last night. It was quite good, well written and enough variation from the norm to spark new thoughts. I had heard it described as fantasy, but it owes more to fairy tale/folklore than fantasy.
This is what happens when you let nerds go unwedgied for too long. - Goatunit
FTB on Google+
Top

I've just finished the first book in Raymond E. Feist's new series, King of Ashes. I have to say, I'm underwhelmed. I have enjoyed the vast majority of his works, but this one is just a bit dull. It's 550 pages and nothing much really happens throughout the entire book. I understand that, as the first book in a series, he's setting the scene and establishing character here, but honestly, give us some kind of action to maintain interest.

Not sure if I'm going to bother reading book 2.
"...with frikin' lasers!"
Top

Is that a new universe from his Magician series, or more continuation from there? I loved the beginning of that series way back when, but lost touch with/interest in it and haven't had enough motivation to go back to it.
An appeaser is one who feeds a crocodile, hoping it will eat him last. -Winston Churchill
Top

Is that a new universe from his Magician series, or more continuation from there? I loved the beginning of that series way back when, but lost touch with/interest in it and haven't had enough motivation to go back to it.

It is a new world, quite distinct from any prior works.

Having read all of the Magician series and its various offshoots, I'd recommend you give the later ones a go some time. In my opinion, the standard is generally high, although with some lapses in the middle. Specifically, Magician was really his testing ground, his first novel and it shows. However, he learned fast and the other two books in the opening trilogy are fantastic, as are the two single volume tales that followed. The four volume Serpentwar Saga were good, but not as good. Then came his duff patch with the various Krondor and Legends books (he was going through a divorce at the time and his writing suffered). However, with the Talon of the Silver Hawk series he was back to his best, and all of the series since then have been good, though not as good.

All of which makes it particularly disappointing that his new work is just so dull.
"...with frikin' lasers!"
Top

The Dark Descent of Elizabeth Frankenstein, by Kiersten White

It belongs to that sub-genre where the author retells a famous story from the perspective of another character. In this case, it is Frankenstein: A Modern Prometheus told from the perspective of Victor's fiance Elizabeth. It's great so far, filling in lots of little details of the time before Victor (and his monster) return to the family home. It really helps flesh out almost everyone else in the story who doesn't get star time in the original book. I'm already dreading the fates of several characters now that I know them better... and I know what's coming. If... of course, it plays out the same way. I'm a little worried about what's going to happen, given that after some time at home, the meat of the story heads to England/Scotland/Ireland without Elizabeth. Either the story will get changed[1] more or it's going to go in a different direction for a while. All in all, I recommend it.

[1] Truth be told, it already has. TDDoEF ret-cons F:AMP but does so in ways Victor would never have been aware of. So the original text works as Victor's story of what happened. This 'sequel' adds Elizabeth's version.